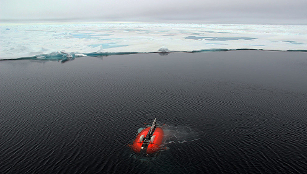 The Nereid Under Ice (NUI) submerisble vehicle heads out to explore what's living below the Arctic sea ice.CHRIS GERMAN, WHOIAs part of the International Ocean Discovery Program (IODP), an international team has found evidence of microbial life surviving at 2,400 meters (7,874 feet) beneath the seabed, more than 1,000 meters (3,000 feet) beneath the water’s surface, off the coast of Japan. Meanwhile, a separate team working with the submersible Nereid Under Ice (NUI) vehicle captured images of life flourishing below the Arctic sea ice. Both sets of results were presented this week at the 2014 meeting of the American Geophysical Union in San Francisco.

“We keep looking for life, and we keep finding it, and it keeps surprising us as to what it appears to be capable of,” Caltech’s Elizabeth Trembath-Reichert, a member of the IODP team that identified the subterranean microbes beneath the sea floor, told BBC...

Despite living in an environment with no light, no oxygen, and very few nutrients, the microbes, which appear to survive on a low-calorie hydrocarbon diet, were abundant. The source of their food is the ancient coal bed system that is buried at this depth. Some microbes consume the coal itself, Trembath-Reichert noted, or smaller organic compounds associated with the beds, including methane and other hydrocarbons. Sure enough, in the lab, the researchers demonstrated that the collected microbes eat methyl compounds, which they process with their extremely slow metabolism. One question that remains is how these deep biospheres participate in the carbon cycle.

Up in the Arctic, marine biologist Antje Boetius of the Alfred Wegener Institute Helmholtz Center for Polar and Marine Research in Bremerhaven, Germany, and her colleagues navigated the Woods Hole Oceanographic Institution-built NUI through four Arctic dives, during which the vehicle snapped images of brown algae growing on the bottom of the ice, and giant crustaceans and tiny larvaceans swimming below. “It was the first time we could document such an abundance of life under the ice,” Boetius told Nature. The team next plans to use NUI to explore submerged regions of shrinking glaciers and ice shelves in the world’s polar regions.