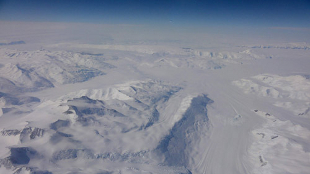 FLICKR, US EMBASSY NEW ZEALANDRussian scientists have this week responded to criticisms that unknown bacteria found in water samples taken from Lake Vostok, deep below the Antarctic Ice Sheet, were from contaminants such as the kerosene used during drilling. Instead, they claim, one particular microbe is different to anything already known, and thus likely from the lake.

Sergey Bulat of the St. Petersburg Institute for Nuclear Physics, who is leading the research, stood by the claim, first announced in Moscow on March 6, that ice from the subglacial lake harbored bacteria with DNA that was less than 86 percent similar to DNA from known bacterial species.

“We are very sure that what we have found is an unclassified native microbe,” Bulat told Nature. “It seems to belong to a division of uncultured environmental bacteria that haven’t been determined yet,” though more tests will be required to prove it...

The Russian team breached Lake Vostok, the largest of Antarctica’s 300 or so subglacial lakes, in February 2012. Preliminary genetic analyses of water that froze onto the drill bit, reported last October, revealed bacteria from drilling fluid and human skin had contaminated the samples. But further tests have revealed three variants of one bacterium that do not match with any known bacteria, Bulat told Nature.

The team plans to do more sophisticated tests on the mysterious bacteria, though high levels of contamination and small numbers of bacterial cells in the current samples make that difficult. They also hope that new, cleaner samples from Lake Vostok, due to arrive in St. Petersburg in May, will prove more conclusive.