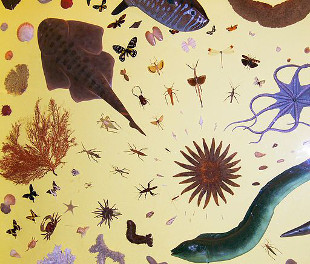 How many supercomputers would it take to store all of life’s DNA information? About 1021, according to a study published last week (June 11) in PLOS Biology. Researchers at the University of Edinburgh estimated the total amount of DNA present in Earth’s biosphere, a number they suggest could be used as a measure of biodiversity.

“We know that there are a lot of things that change in the natural environment, such as habitat loss. This obviously has an effect on the species living there. This approach offers a complementary way to quantify the changes,” study coauthor Hanna Landenmark, a graduate student at Edinburgh, told The Independent.

The researchers used previous biomass estimates to come up with total cell numbers for each of the five major groups of life: prokaryotes, plants, animal, and protists. By considering the average genome size for each group and the...

Put another way, the team calculated that it would require 1 billion standard shipping containers to contain all of life’s DNA. According to the estimate, plants seem to harbor the most DNA, weighing in at 3.6 × 1031 megabases, though they were closely followed by prokaryotes (1.6 × 1031 megabases).

The researchers left out chloroplast and mitochondrial DNA given their small genome sizes. They also disregarded fossilized DNA and leaf litter, which, they wrote, was “analogous to old garbage data.”