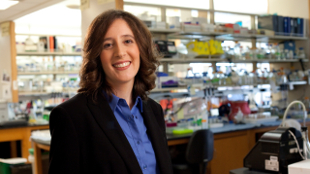 Elissa Hallem, one of four biologists to receive a "genius" grant, in her lab at UCLAJohn D. & Catherine T. MacArthur FoundationEvery year the MacArthur Foundation hands out "genius" grants worth $500,000 each to 23 people doing promising work in fields ranging from music and literature to social work and medicine. The "no-strings-attached" award, available only to citizens or residents of the United States, is designed to offer recipients more freedom to pursue their goals. The 2012 MacArthur Fellows were announced this week, and among those to receive the career-changing phone call were four life scientists.

The youngest of the recipients, Elissa Hallem, 34, is a neurobiologist at the University of California, Los Angeles (UCLA). Hallem studies the physiology and behavioral consequences of odor detection and chemoreception in invertebrates. Her work on how parasitic nematodes use carbon dioxide to find host organisms could uncover new ways to tackle parasitic...

The call came as she was working in her lab at UCLA. “I didn't manage to say much other than 'Wow' and 'Thank you,’” Hallem told the Associated Press. “I feel very honored that they recognized my work in this way and are making this investment in my research.”

Another California-based recipient, 39-year-old Sarkis Mazmanian, a medical microbiologist at Caltech in Pasadena, investigates the mechanisms underlying the symbiotic relationship between humans and their microbial partners in an attempt to tackle disease. Nancy Rabalais, 62, a marine ecologist and executive director at the Louisiana Universities Marine Consortium, will use her MacArthur money to continue to document and mitigate the effects of hypoxic "dead zones" in the Gulf of Mexico.

The only life scientist not based in the US to receive a genius grant this year is Melody Swartz, 43, a bioengineer at the École Polytechnique Fédérale de Lausanne in Switzerland. Swartz studies the mechanisms controlling fluid movement through tissue and the implications for human health. Her work suggests that as well as cell surface markers and chemical signals, direct mechanical forces also influence tissue vascularisation, an insight with implications for cancer biology.