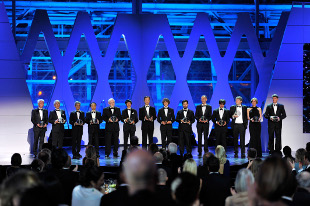 STEVE JENNINGS/GETTY IMAGES (COURTESY BREAKTHROUGH PRIZE)The 2016 Breakthrough Prizes were awarded yesterday (November 8) in Silicon Valley. Pioneers in mathematics, physics, and the life sciences were honored with cash prizes during a ceremony for the award, which was cofounded by Facebook’s Mark Zuckerberg; his wife, Priscilla Chan; and Google cofounder Sergey Brin, among other tech titans.

“This year’s laureates have all opened up ways of understanding ourselves,” Anne Wojcicki, a Breakthrough Prize cofounder and chief executive of the personal genomics company 23andMe, said in a press release. “In the life sciences, they have pushed forward new ideas about Alzheimer’s, cholesterol, neurological imaging, and the origins of our species. And for that we celebrate them.”

Edward Boyden of MIT and Karl Deisseroth of Stanford University were each awarded prizes for their work on optogenetics, which allows researchers to program neurons to activate when exposed to a pulse of...

“Optogenetics’ biggest impact by far has been in enabling thousands of discoveries about how neural circuits control behavior,” Deisseroth said in a press release. “I hope this technology will continue to be used to discover many more principles of nervous-system function, in health and in neurological and psychiatric disease.” (In February, Deisseroth won the Foundation for the National Institutes of Health’s 2015 Lurie Prize in Biomedical Sciences, recognizing his achievements in his contributions to optogenetics, among other techniques.)

John Hardy of University College London received an award for his discovery of mutations that cause early-onset Alzhemier’s disease. He was having bacon and eggs in his kitchen on the Saturday morning he received news of his win, The Guardian reported. “I was speechless. It was a 15-minute call that changed my life. I had to have another cup of coffee,” Hardy told The Guardian.

Helen Hobbs of the University of Texas Southwestern Medical Center was recognized for discovering gene variants that alter cholesterol levels. “This is a wonderful honor,” said Hobbs in a press release. “I am grateful for the opportunity the Breakthrough Prize offers to influence a new generation of scientists.”

Svante Pääbo of Germany’s Max Planck Institute for Evolutionary Anthropology received an award for his work sequencing ancient DNA, including the genomes of multiple human ancestors. (See “What’s Old Is New Again,” The Scientist, June 2015.) Pääbo, who said he bought his first tuxedo for the ceremony, heard he had won the prize while on a family holiday in Sweden, according to The Guardian. “The phone went while I was driving and my wife said ‘Don’t take the call,’ but I took it anyway, and I’m glad I did,” he told The Guardian.