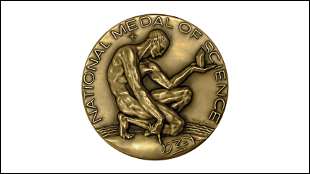 NATIONAL SCIENCE FOUNDATIONThe White House announced the 2015 recipients of National Medals of Science and the National Medals of Technology and Innovation this week (December 22). The awards honor nominated scientists who have made outstanding contributions to their fields and who have impacted others beyond their scientific communities.

Simon Levin, an ecologist from Princeton University who uses mathematics to study ecosystem patterns, is one of the life scientists honored with a National Medal of Science.“[Levin] helped transform the field of ecology by using theory to frame and crystalize problems, and his ability to listen and learn from empiricists made his work compelling and relevant,” his colleague Daniel Rubenstein of Princeton said in a press release.

Mary-Claire King from the University of Washington is also honored with a National Medal of Science; she demonstrated a genetic predisposition for breast cancer, and identified the gene BRCA1.

Stanley Falkow, a microbiologist at Stanford University, will receive a National Medal of Science in recognition of his contributions to infectious disease research, which led to clinical applications including the whooping cough vaccine. Falkow learned of his award in an email from President Obama’s chief science adviser, John Holdren. “It was a total surprise,” Falkow said in a press release. “There are hundreds of students and colleagues around the world with whom I’d like to share this honor.”

Nancy Ho, a chemical engineer from Purdue University, will receive a National Medal of Technology and Innovation. She has focused her research on renewable biofuels using engineered yeast.

Jonathan Rothberg of Yale University will receive a National Medal of Technology and Innovation for his pioneering work in gene sequencing. “My motivation for developing high-speed ways to understand a person's genetic makeup was personal—my son was rushed to the newborn intensive care unit at Yale, and I wanted to know why,” Rothberg said in a press release.

Cato Laurencin of the University of Connecticut (UConn) will also receive a Technology and Innovation medal. His work has included the growth and regeneration of musculoskeletal tissue. “[Laurencin’s] unwavering commitment to pioneering medical, surgical, and research innovations are truly advancing scientific discovery and human health,” UConn President Susan Herbst said in a press release.

Mathematicians, materials engineers, and physicists were among the other 10 awardees. “The knowledge produced by these Americans today will carry our country's legacy of innovation forward and continue to help countless others around the world,” President Obama said in the announcement. “Their work is a testament to American ingenuity.”

The medals will be distributed at a ceremony in early 2016.