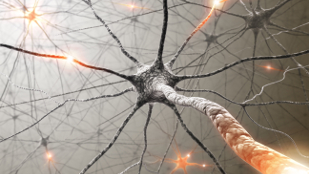 Borrowing a gene from a Dead Sea microorganism, researchers at Harvard University have developed neurons that fluoresce in response to electrical activity, providing the first ever visual cue for neuronal firing.

“It’s very exciting. In terms of basic biology, there are a number of things we can now do which we’ve never been able to do,” lead researcher Adam Cohen told the Harvard Gazette. “We may someday even be able to study how these signals move in living animals.”

To achieve this feat, Cohen and his colleagues transfected cultured rat hippocampal neurons with a viral vector carrying the gene for a microbial rhodopsin protein called Archaerhodopsin 3 (Arch) from an arcahea species found in the Dead Sea bordering Jordan and Israel. The resulting neurons lit up in response to the voltage changes that occurred when neurons fired, allowing the researchers to visualize individual action potentials, according to...

“Before, the best way to make a measurement of the electrical activity in a cell was to stick a little electrode into it and record the results on a volt meter,” Cohen told the Gazette. “The issue, however, was that you were only measuring the voltage at one point, you weren’t seeing a spatial map of how signals propagate. Now, we will be able to study how the signal spreads, whether it moves through all neurons at the same speed, and even how signals change if the cells are undergoing something akin to learning.”