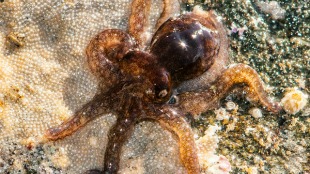 FLICKR, JERRY KIRKHARTTwo studies—one on squid and cuttlefish, another on octopuses—published in the Journal of Experimental Biology last week (May 15) demonstrate that the skin of color-changing cephalopods harbors molecules used in vision, perhaps explaining how the organ detects light.

In the case of the squid and cuttlefish, researchers from University of Maryland Baltimore County and the Marine Biological Laboratory in Woods Hole, Massachusetts, found that the animals’ chromatophores—the cells that stretch out to expose their colorful pigment or pinch in to hide it—express opsins. And in the study on the octopus, scientists at the University of California, Santa Barbara, observed that illuminating a patch of skin caused the chromatophores to expand. In octopuses, however, it was the cilia that contained opsins.

“[O]ur data suggest that a common molecular mechanism for light detection in eyes may have been co-opted for light sensing in octopus skin and...

While both studies identified vision machinery in the skin, they did not show that the animals “see” using it.

“All the machinery is there for them to be light-sensitive but we can’t prove that. It’s been very frustrating,” Tom Cronin, a vision researcher at the University of Maryland who was part of the squid and cuttlefish study, told National Geographic’s Not Exactly Rocket Science. “We don’t know if they contribute to camouflage or are just general light sensors for circadian cycling or are driving hormonal changes. They have a job to do but we don’t know what it is.”