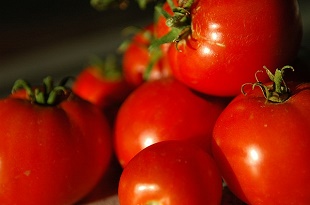 FLICKR, ST0RMZTomatoes are summer’s fruit, yet too much light can be lethal to cultivated tomato (Solanum lycopersicum) plants. A single genomic region, however, can make plants tolerant to continuous light, and increase crop yields significantly, according to a study published yesterday (August 5) in Nature Communications.

In the 1920s, researchers discovered that the leaves of modern tomato plants yellowed and decayed when exposed to constant light. But other plants, such as peppers, Arabidopsis, and even species related to tomatoes showed no signs of such injuries. So Aarón Vélez Ramírez of Wageningen University in the Netherlands and his colleagues analyzed genomic and gene expression data from eight wild varieties of tomato, and found that the presence of one gene on chromosome 7 was critical to the light-hardiness of these species.

All the light-sensitive species tested carried a nine base-pair deletion in this gene, known as CAB-13,...

The study adds to years of effort from geneticists and plant breeders trying to build a tastier tomato. In May 2012, a nine-year-long effort to complete the first tomato genome sequence provided insights into the fruit’s evolution. The present work “not only proves that limitations for crop productivity [caused by light intolerance] can be overcome, but also opens new research lines in the most important process of photosynthesis,” Vélez Ramírez and his colleagues wrote in Nature Communications.