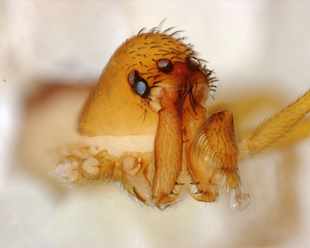 The trap-jaw spider Chilarchaea quellonSMITHSONIAN, HANNAH WOODThe bites of tiny trap-jaw spiders pack a powerful punch. The jaws of these diminutive arachnids can chomp down faster than those of any known spider, Hannah Wood, curator of spiders at the Smithsonian’s National Museum of Natural History, and colleagues reported yesterday (April 7) in Current Biology.

“These are the fastest-known arachnids so far,” Wood told Smithsonian, referring to spiders in the Mecysmaucheniid family, which are native to New Zealand and southern South America. Wood named them “trap-jaw” spiders because their mechanism for catching prey—like that of so-called trap-jaw ants—resembles a mouse trap clamping shut.

For the present study, Wood and colleagues collected 26 species of the spiders in Chile—many of them smaller than a grain of rice, according to The Washington Post. The researchers filmed the bites of 14 species with a high-speed camera. They distinguished the...

The fastest spider studied (Zearchaea sp4) could shut its trap in just 0.12 milliseconds—more than 100 times the speed of the slowest one (Mecysmauchenius newtoni), Wood and her colleagues found.

The power needed for such a speedy bite exceeds the known amount that muscles can store, so there must be some other mechanism at play, according to the researchers. The genetic analysis revealed this power-amplification trait has evolved independently at least four times within this family of spiders.

“It will be interesting to find out if the power amplification mechanism is also the same in each evolutionary iteration and, if so, why this particular group of spiders seems to be uniquely predisposed to it,” Jeffrey Shultz, an arachnologist at the University of Maryland at College Park who was not involved in the study, told Smithsonian.