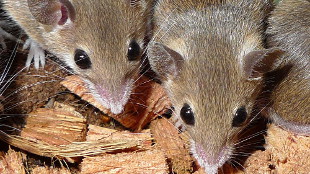 Mound-building mice (Mus spicilegus) will mate more quickly with a partner that is equally anxious than if paired with a more- or less-apprehensive mouse, according to a study published in the May issue of Animal Behaviour.

Researchers from the University of Paris used two tests to measure the personality of lab-bred descendants of wild mice caught in Hungary. The first measured how adventurous the mice were by recording their behavior in a walled arena with open space in the middle. Braver mice spent more time exploring the center of the arena. The researchers then used a second test, known as an elevated plus maze, to quantify anxiety by comparing how much time an animal spent on the two walled arms and on the two non-enclosed arms of a plus-shaped maze raised two feet off the floor. The animals were consistent in their behavior in...

The scientists then randomly paired the monogamous rodents in two groups, and found that they could best explain the difference between pairs that bred within the first 90 days of pairing and those that did not by how similarly each member of the pair behaved on the anxiety test. Although results suggesting that personality matching is beneficial for mating have been found in birds, fish, and squid, “ours is the first study in mammals on personality matching and reproductive parameters,” study coauthor Heiko Rödel told Science News.

The tendency to share personality traits with a mate could help maintain personality variation in the population, the authors wrote in their study. That could be important for promoting early spring breeding in the mound-building mouse, which has a life expectancy in the wild of less than a year.