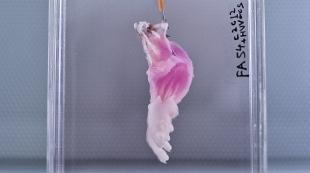 As an alternative to prosthetics, some scientists are interested in bioengineering replacement limbs using tissues or cells from limb recipients. Last month (May 22), researchers at Harvard Medical School and Massachusetts General Hospital reported a technique in Biomaterials that took a step toward this goal by essentially regrowing rat forearms and hands from a biological scaffold.

To do this, the scientists “decellularized” the limbs by treating them with detergents, leaving behind cell-free collagen scaffolds of blood vessels, tendons, and muscle. They supplied the limbs with nutrients and oxygen through an artificial circulatory system as they “recellularized” the scaffolds by delivering several lineages of cells, such as muscle progenitors, to repopulate the limb tissues. At the end of the recellularization process, which took several weeks, the limbs’ muscle fibers were able to respond to electrical stimuli.

“It’s a very exciting development, but the challenge will be to create a functioning limb,” Daniel Weiss of the University of Vermont College of Medicine who was not involved in the work told New Scientist.