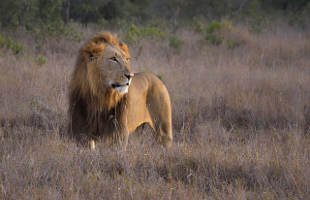 FLICKR, DIANA ROBINSONAn international team is predicting serious declines for African lions based on population trends over the last 25 years. The team this week (October 26) estimated that habitat loss and direct killing by humans will cause a 50 percent decline in lion numbers in the next two decades; their results were published in PNAS.

The researchers, led by Hans Bauer of the University of Oxford, obtained population estimates from a variety of study types, including radio telemetry, photo captures, and direct counts. Using data from 1990 onward for 47 African lion populations, they calculated the growth rate of each population to arrive at their prediction.

Lion populations are projected to increase in parts of southern Africa, where the land is intensively monitored, observed the research team. “These findings clearly indicate that the decline of lions can be halted, and indeed reversed as in southern Africa,” Bauer...

The authors proposed listing the African lion as regionally endangered in Central and East Africa, where it is more severely threatened by habitat loss, sport hunting, killing to remove a perceived threat to livestock, and poaching for medicinal compounds. “We have written hundreds of papers on how to conserve lions,” Bauer told The Washington Post. “We know how to do it, it’s just not a priority for governments and donors.”

“We’ve got a huge amount of work ahead of us,” study coauthor Luke Hunter, president of the conservation organization Panthera, told The Christian Science Monitor. “It’s not just about lions. It’s about protecting these massive, iconic African landscapes.”