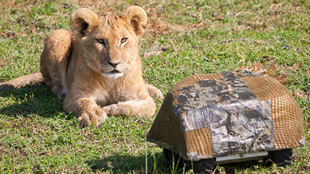 The BeetleCam is back! And this time, it’s lion proof.

The new, improved, and heavily armored version of the remote controlled, four-wheel camera buggy that met an untimely death in the jaws of a curious lioness in Tanzania in 2009 headed to the African savannah and captured stunning images of lions in Masai Mara, Kenya.

Originally conceived and built from scratch by brothers Will and Matt Burrard-Lucas in 2009, BeetleCam offers wildlife photographers a safe, original, and often interactive perspective of African wildlife. But during its original test run in Tanzania, the contraption proved too flimsy for the likes of lions, which destroyed the car and the camera on their first encounter. Over the next 2 years, the brothers made a few improvements to the model’s carapace to make it sturdier, and deployed two new BeetleCams in Masai Mara last year, both of which...

By the end of the expedition, “our armoured BeetleCam was scarred and battered; the screws that held it together were losing their thread and the carapace was covered in scratches and bite marks,” the duo wrote on their website. “However, we could breathe a sigh of relief because we had reached the end of our trip and we hadn’t lost a camera this time!”

The Burrard-Lucas brothers have already published some photographs of the 2011 expedition to their website, and are expected to publish more as well as a documentary of the project.