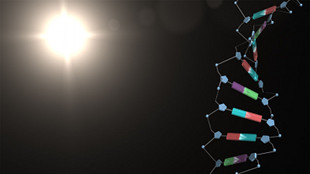 Synthetic biologists have engineered Escherichia coli cells to behave like transistors, according to a study published last week (March 28) in Science. Computer-like cells could be programmed to carry out simple logical functions.

Drew Endy, a synthetic biologist at Stanford University and one of the study’s authors, said that cells are naturally suited to be programmed by humans, who follow the code written in their DNA every day. “Any system that's receiving information, processing information, and then using that activity to control what happens next, you can think of as a computing system,” he told NPR.

The scientists call their new invention a “transcriptor,” because it replaces transistors’ usual electrons traveling along wires with RNA polymerase traveling along a strand of DNA. If a terminator sequence in the middle of the DNA is flipped in one configuration, the RNA polymerase falls off the strand. But flipped...

Various combinations of terminators could carry out different Boolean logical functions. For instance, to make an AND gate, the scientists could engineer a strand of DNA with two terminator sequences. For the RNA polymerase to make it to the end of the strand, both terminator sequences would need to be flipped to allow the molecule’s passage.

Cells could theoretically be programmed for medical uses inside the human body. Timothy Lu of Massachusetts Institute of Technology, who published his own paper on cellular transistors in February, told NPR that the cells could be programmed to light up in the presence of molecular signatures of cancer, or even to produce drugs to kill the cancer cells.

Lu told ScienceNOW that Endy’s transistor was exciting because it showed not only that making biological transistors was possible, but that the transistors could be used to amplify very small signals in the cell—a quality that would be especially useful for diagnosing disease.

For further discussion on how scientists are computing with DNA, see “DNA Machines Inch Forward.”