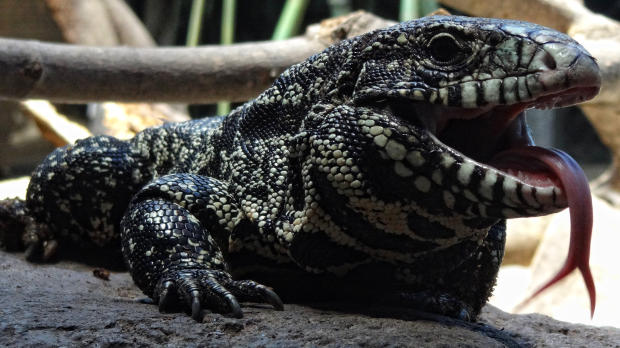 WIKIMEDIA, BJORN CHRISTIAN TORRISONThe Argentine black and white tegu (Salvator merianae) is unique among its reptilian kin, according to researchers who recently confirmed that the lizard can regulate its body temperature, in some seasons raising it a full 10°C above its surroundings. The tegu’s feat of endothermy is special among the typically ectothermic Class Reptilia—only a few other species are known to purposefully alter their body temperatures above that of the surrounding environment, and none achieve such a dramatic difference.

Researchers from Canada and Brazil reported last week (January 22) in Science Advances that tegu lizards behave like other reptiles for most of the year—sunning themselves to stay warm during cold periods and seeking shade to lower their body temps—but act more like endotherms, such as birds and mammals, during their mating season (September to December). In the coldest, early morning hours of that season, the tegu...

Although Tattersall and his colleagues could not pinpoint a physiological mechanism that allows the tegu to produce and sustain that body heat, they did note that the lizards’ breathing and heart rates increased as they warmed up.

The findings—along with similar research into the endothermic abilities of a fish, the opah—may hold clues as to how endothermy evolved. “The fully warm-blooded conditions of birds and mammals may have evolved gradually as their ancestors tinkered with their metabolic systems and went through a hybrid phase like this new lizard shows,” Stephen Brusatte, a palaeontologist at the University of Edinburgh in the U.K. who was not involved with the study, told New Scientist.