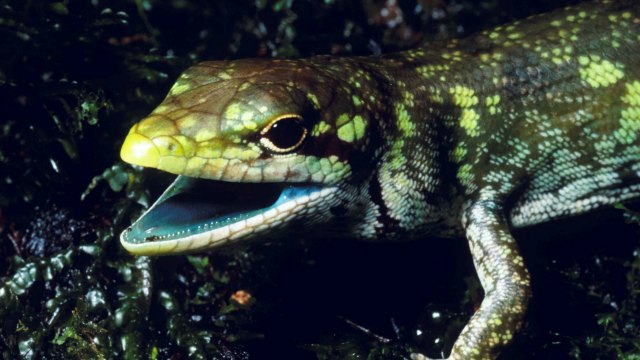 Prasinohaema prehensicauda, a green-blooded skinkCHRISTOPHER AUSTINSeveral species of New Guinea skinks, a type of lizard, are just as colorful inside as they are outside—bright green blood runs through their veins, an oddity among animals. But evolutionarily, the trait isn’t so strange. Researchers report in Science Advances today (May 16) that green blood likely arose in lizard lineages four different times.

“Even if the trait only evolved once, the fact that it has been retained across several species indicates that it confers a tremendous advantage,” Adriana Briscoe, an evolutionary biologist at the University of California, Irvine, tells The Atlantic.

What that advantage might be is unknown. The green comes from biliverdin, a byproduct of dying red blood cells. The lizards have it in such great abundance—20 times more than the highest concentration recorded in a human, according to The Atlantic—that such a level could kill other animals.

“There’s so much green pigment in the blood that it overshadows the brilliant crimson coloration of red blood cells,” coauthor Chris Austin, a biologist at Louisiana State University, tells NPR. “The bones are green, the muscles are green, the tissues are green, the tongue and mucosal lining is green.” 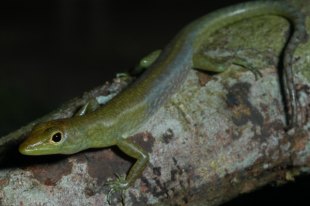 Prasinohaema virens, a green-blooded skinkCHRISTOPHER AUSTINTo find out how the trait arose in lizards, Austin and his colleagues examined the genomes of 51 species of skinks, including six with green blood. It turned out that many of the species with green blood aren’t closely related to one another, and have more in common phylogenetically with red-blooded skinks.

Austin tells NPR that the biliverdin likely didn’t give the animals an advantage in deterring predators, as animals are able to eat the skinks without untoward GI troubles (he himself ate them, saying it was like “bad sushi”). It’s possible the green blood protects the animals from malaria, as in vitro studies have shown that human blood with high levels of bilirubin, a close relative, can stave off infection.