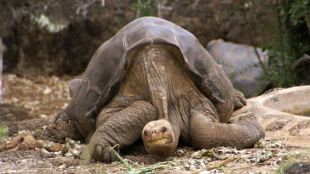 The subspecies of giant Galapagos tortoise that inhabited Pinta Island in the Ecuadorian Galapagos was thought to have already gone extinct when George was discovered in 1972, spurring an enthusiastic program to get him to mate with similar sub-species.

Unfortunately, George was not so enthusiastic about the program, and failed to reproduce in his 40 years at the Galapagos National Park. He lived for 15 years with two female tortoises of a related subspecies from nearby Wolf Volcano, and although he did mate with them, they produced infertile eggs. Hoping a closer relative would produce viable eggs, the park keepers introduced George to two female tortoises from Espanola Island, but he didn’t mate with either of them.

Lonesome George’s exact age was unknown, but he was believed to be around 100, making him relatively young, as the subspecies is known to live to 200....

Lonesome George was one of 11 subspecies of Galapagos giant tortoise in existence today, although as many as 15 were once believed to exist before they were hunted for meat in the late 19th century. The unique features of the different subspecies helped Darwin formulate his theory of evolution, and to many Lonesome George was a symbol of the Galapagos Islands.