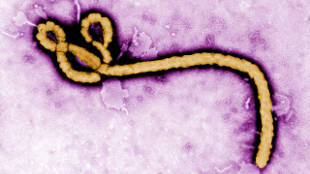 FLICKR, CDC GLOBALEbola can persist on stainless steel, plastic, and Tyvek, a material used in suits worn by researchers and health-care workers to protect themselves from the virus, for more than a week, depending on conditions, according to a study published last month (April 30) in Emerging Infectious Diseases. In a climate-controlled setting, such as a hospital, Ebola lived for 11 days on Tyvek, eight days on plastic, and four days on stainless steel; in hot, humid conditions, typical in West Africa, the virus survived up to three days on Tyvek, and less time on the other two materials.

“Given the unprecedented [number] of health-care professionals who became infected with Ebola virus during the outbreak, we are trying to elucidate all potential routes of transmission and potential for persistence of the virus,” coauthor Vincent Munster, chief of the Virus Ecology Unit at Rocky Mountain Laboratories in Hamilton, Montana,...

The study also found that Ebola can live in water for up to six days, in dried blood for up to five days, and in liquid blood outside the body for up to two weeks. These results emphasize that “appropriate measures should be taken to safely dispose of these samples,” Munster told LiveScience.

Meanwhile, new evidence also suggests that the virus can survive in and be transmitted via semen. According to a report from the US Centers for Disease Control and Prevention (CDC) published this month (May 1), a woman in Liberia may have contracted Ebola after having sex with a man who had been infected five months earlier but had recovered. The man had no signs of Ebola in his blood, but his semen did test positive for presence of the virus, and a partial viral genome recovered from the man’s semen suggested a match with the virus the woman contracted.

“Previously, CDC and [the World Health Organization] recommended abstinence or condom use for at least 3 months following recovery from Ebola,” the report read. “However, to prevent transmission of Ebola, contact with semen from male survivors should be avoided [indefinitely].”