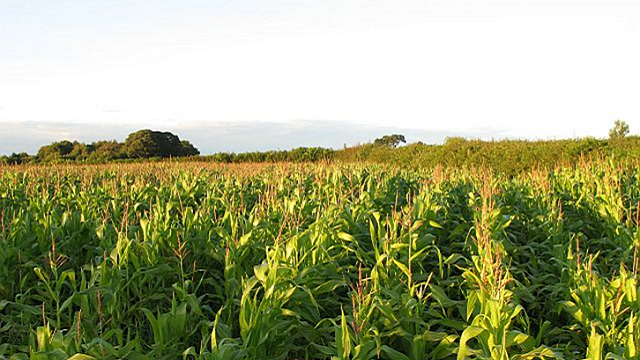 WIKIMEDIA, RICHARD WEBBNot all plants fix carbon from the atmosphere in the same way. More than 90 percent of plants use what’s known as C3 carbon fixation; others such as maize and sugarcane use a variation on the process known as C4 ­carbon fixation. Based on their biology, C4 plants have long been thought to be less responsive than C3 plants to changes in carbon dioxide concentration—an important difference to take into account when studying how plants may influence future climate change.

But a report published yesterday (April 20) in Science is now calling that thinking into question with results that suggest that, over long timescales, the opposite may be true. “These findings challenge the current [C3-C4] paradigm” about carbon dioxide concentrations, the researchers write in their paper, “and show that even the best-supported short-term drivers of plant response to...

C3 and C4 plants respond differently to changing carbon dioxide concentrations thanks to differences in the molecular pathways they use to capture the gas from the atmosphere. While C3 plants use an enzyme known as RuBisCO to fix carbon into a 3-carbon compound, C4 plants—many of them grasses and important crop plants—use a different enzyme to produce a 4-carbon compound first.

The C4 plants’ enzyme has a much higher affinity for carbon dioxide molecules, leading researchers to hypothesize that these plants will gain less from increasing carbon dioxide concentrations than their C3 cousins.

Many experiments have provided support for this hypothesis—and the first 12 years’ worth of data from this latest experiment, carried out in Minnesota, was no different. Over that period, C3 plants being grown in elevated carbon dioxide levels had an average biomass increase of 20 percent compared to control plants being grown in ambient conditions, while C4 plants showed just a 1 percent gain compared to their ambient-grown counterparts.

But then the tables turned. Over the next eight years of the experiment, the C4 plants gained 24 percent more biomass than their ambient-grown counterparts, while C3 plants instead averaged around 2 percent less.

The researchers don’t know what’s behind the change in trend, although they note in their paper that the levels of available nitrogen in the soil fluctuated in harmony with growth rates for each of the two plants, suggesting something in the nitrogen-fixing microbial community might be involved.

All the same, the findings are “a huge surprise,” study coauthor Peter Reich, an ecologist at the University of Minnesota in Saint Paul, tells Nature. “I don’t think any scientist in the world would have predicted it.”

The study holds relevance for climate models, which include estimates of plants’ capacity to take up carbon dioxide from the atmosphere. The new findings suggest while C3 ­plants might contribute less to soaking up carbon dioxide than previously anticipated, C4 grasslands could contribute more. “The main message is don’t count out the C4 grasslands,” Dana Blumenthal, an ecologist with the US Department of Agriculture in Fort Collins, Colorado, tells Nature.

Meanwhile, the unexpected reversal in plant growth trends highlights the need for more long-term experiments, Richard Norby, a forest ecologist at Oak Ridge National Laboratory in Tennessee who was not involved in this project, tells Nature. “You can’t get at that with short experiments.”