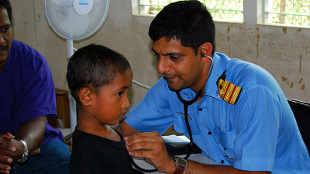 WIKIMEDIA, US NAVYPeople around the world are living longer but suffering from higher levels of sickness from chronic diseases, according to the Global Burden of Disease Study 2010, published this week (December 13) in a special issue of The Lancet.

Collating the work of 486 authors in 50 countries over 5 years, the study is the largest-ever systematic attempt to describe the global distribution and causes of diseases, injuries, and health risk factors. A similar, but smaller, project was completed in 1990.

The new study showed that, globally, female life expectancy at birth increased from 61.2 years in 1970 to 73.3 years in 2010, while male life expectancy rose from 56.4 years to 67.5 years over the same time period. The data also show that huge discrepancies in life expectancy remain between rich and poor countries, as was seen in the 1990 study. For example, deaths of children...

Today, diseases such as cancer and heart disease have become the dominant causes of death and disability worldwide. Heart disease and stroke caused one in four deaths in 2010, accounting for almost 13 million people worldwide, while that same year, cancer killed 8 million people—an increase of 38 percent since 1990.