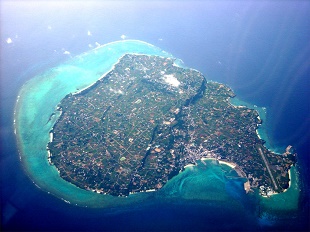 WIKIMEDIA, GOKIA little time apart—say, on islands, or separated by oceans—can nurture developing languages. Just as animal species grow distinct from one another when physically separated, geographical barriers foster linguistic diversity and variation, according to a recent study in the Journal of Evolutionary Biology.

Sean Lee and Toshikazu Hasegawa of the University of Tokyo chose to study the divergence of Japonic languages from one another by comparing variations spoken across the islands, and correlating the extent of differences with geographical factors. They found that geographical proximity—and isolation by the surrounding ocean—explained most of the lexical variation across these languages. “The same factor responsible for much of the biodiversity in the Galápagos Islands is also responsible for the linguistic diversity in the Japanese Islands: the natural oceanic barriers that impede interaction between speech communities,” the authors wrote in their paper.

Based on the criteria typically used to classify animal species’ risk of extinction, Tatsuya Amano of the University of Cambridge, U.K. and his colleagues estimated how environmental and social factors affected the decline of languages across the world. They found that decreases in speaker numbers for less frequently used languages were most significant in regions with fast-growing economies. Increasingly rare use as a result of fewer speakers continues to threaten local languages spoken in the tropics and the Himalayas, the authors found.

The study “shows principles about language decline that we've know about, but hadn't been able to put together in a sound way,” linguist Leanne Hinton of the University of California, Berkeley, told Science News.

Categorizing languages in the same manner as endangered species can help protect them, or predict which ones will become vulnerable in the future, according to the authors. “There exists detailed information on projected future changes in the environment, economies and climates,” Amano told LiveScience. “Using such information, together with the findings of this study and further analysis, we would like to understand what will happen to the world's languages, where it will happen and which languages will be threatened in particular.”