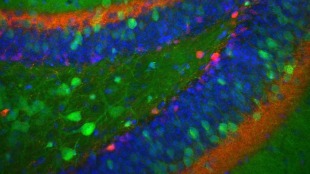 WIKIMEDIA, NATIONAL INSTITUTES OF HEALTHThe brain may continue to harbor old memories, even if they can’t be recalled anymore, according to the results of a mouse study published this week (May 29) in Science. Scientists induced mice to have amnesia, then reactivated particular neurons that had been active during the formation of a memory, and the memory—fear of a cage—returned.

“Brain researchers have been divided for decades on whether amnesia is caused by an impairment in the storage of a memory, or in its recall,” Susumu Tonegawa, director of the RIKEN-MIT Center for Neural Circuit Genetics and an author of the study, said in a press release. “Our conclusion is that in retrograde amnesia, past memories may not be erased, but could simply be lost and inaccessible for recall.”

Tonegawa and his colleagues identified genetically labeled neurons—called memory engram cells—that were active in mice during the formation...

The mice were also genetically engineered to have light-sensitive neurons, and Tonegawa’s team excited the labeled neurons, which caused the mice to show fear behaviors in a new cage.

“It’s not surprising that they could trigger the memories, but it is a cool way to do it,” James Bisby, a neuroscientist at University College London who did not participate in the study, told New Scientist.

“We are proposing a new concept, in which there is an engram cell ensemble pathway, or circuit, for each memory,” Tonegawa told MIT News. “This circuit encompasses multiple brain areas and the engram cell ensembles in these areas are connected specifically for a particular memory.”