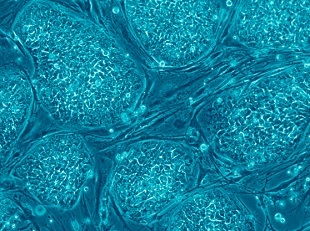 Human embryonic stem cellsWIKIMEDIA, NISSIM BENVENISTYResearchers in the U.K. have developed a technique to track and compare the mutations occurring in lab-grown somatic cells and induced pluripotent stem cells (iPSCs), according to a study published last week (April 7) in PLOS Genetics. Their findings reveal a lower mutation rate in iPSCs compared to lab-grown somatic cells, plus a low risk of generating cancer-related mutations while creating the stem cells, providing further support for the safety of using iPSCs in regenerative medicine.

“Until now, the question of whether generating iPS cells and growing them in cell culture creates mutations has not been addressed in detail,” study coauthor Allan Bradley of the Wellcome Trust Sanger Institute in the U.K. said in a statement. “If human cells are really to be reprogrammed on a large scale for use in regenerative medicine then understanding the mutations the donor cells carry...

Previous work has shown that iPSCs exhibit relatively few mutational differences from their parent cells, but this study marks the first time that researchers have tracked the accumulation of mutations in iPSCs and somatic cells as they grow in the lab. Using cells donated by a healthy, 57-year-old man, the team found that mutations arise 10 times more frequently in lab-grown blood cells than in the iPSCs generated from them.

What’s more, “none of the mutations we found in induced pluripotent stem cells were cancer-driver mutations or mutations in cancer-causing genes,” study coauthor Foad Rouhani of the Wellcome Trust-Medical Research Council Cambridge Stem Cell Institute said in the statement. “We didn’t find anything that would preclude the use of iPS cells in therapeutic medicine.”

The researchers do not yet know why iPSCs have lower mutation rates than normal somatic cells grown in the lab, Rouhani told Medical Daily, although he noted that “other work has suggested that stem cells have more stringent checks in place than somatic cells, perhaps to maintain the integrity of their genomes.”