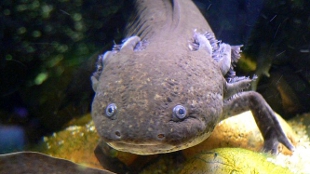 AxolotlWIKIMEDIA, STAN SHEBSMacrophages, a type of immune cell that travels throughout tissues gobbling up bacteria and dead cells, plays a pivotal role in limb regeneration in a salamander called the axolotl, according to new research published this week (May 20) in The Proceedings of the National Academy of Sciences.

"There has been a lot of discussion about how cells of the immune system might impinge on the regenerative process,” Andràs Simon of the Karolinska Institute in Sweden told ABC Science. "No one has experimentally addressed this before, so in that sense it's very important."

Macrophages are known to be important in human muscle repair after acute damage. To test their role in limb regeneration in the axolotl, researchers from the Australian Regenerative Medicine Institute depleted macrophages in amputated salamanders and noticed the formation of stumps and scarring, rather than new limbs. When the stump was reamputated...

Nonetheless, the researchers hope the finding will inform research on human regeneration. "This really gives us somewhere to look for what might be secreted into the wound environment that allows for regeneration," said first author James Godwin.