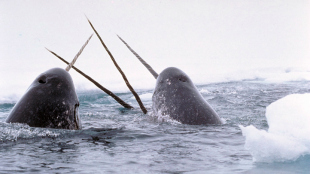 WIKIMEDIA, GLENN WILLIAMSThe function of the single, spiraling tusk of the narwhal, a marine mammal that lives in the Arctic, has captured the imagination of mariners and marine biologists alike. Is it an ice pick? A mate attractor? A paper published in The Anatomical Record today (March 18) indicates that it acts like a long, pointy antenna, picking up signals from the animal’s environment.

“It takes a tremendous amount of energy and devotion to get that thing to grow,” Harvard University’s Martin Nweeia, the lead author of the study, told Wired. “To expend that much energy in such a harsh environment—there has to be a pretty compelling reason to do it.”

The tusk is actually an overgrown, twisted front tooth. In its paper, Nweeia’s group showed that the innervated tooth is porous. When the researchers dipped the tusks of captured narwhals into waters of varying salinity, the whales’...

That the tusk can transmit environmental stimuli is not surprising. “The narwhal tusk is a tooth, and teeth are sensitive,” Kristin Laidre, a marine mammal biologist at the University of Washington, told National Geographic. But although some scientists were “dazzled” by the data, according National Geographic’s The Loom, Laidre was less convinced by the team’s conclusions. “There’s just zero evidence” to support the idea that the narwhal tusk is a sensory structure, she said. Heart rate fluctuations might instead reflect the stress response of the animals to being captured, she explained.