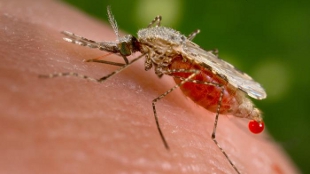 Researchers have found a key to malaria drug resistance in the genome of Plasmodium falciparum, the disease’s causal parasite. In a related study, scientists have determined that resistance to artemisinin, the go-to drug for treating malaria infections around the world, is spreading to Thailand and Myanmar from Cambodia, where resistance was first detected in 2005.

On the genomic front, geneticist Ian Cheeseman at the Texas Biomedical Research Institute in San Antonio and colleagues found two spots on P. falciparum's chromosome 13 that were strongly associated with drug resistance. Cheeseman and his team suggest, in a Science paper published last week, that the region accounts for at least one-third of the heritable variation in the artemisinin resistance seen in Southeast Asia. Though the discovery may aid in strengthening the impact of the...

Researchers also working on Southeast Asia's artemisinin-resistance problem confirmed that resistant strains of P. falciparum are turning up 800 kilometers away from areas of western Cambodia, where they were first discovered. They reported their findings in The Lancet last week. "It would certainly compromise the idea of eliminating malaria…and will probably translate into a resurgence of malaria in many places," study author Francois Nosten of the Shoklo Malaria Research Unit told BBC News.

One of the places that has researchers worrying is sub-Saharan Africa, where malaria is rampant, but artemisinin resistance has not yet arisen. "Spread of drug-resistant malaria parasites within Southeast Asia and overspill into sub-Saharan Africa, where most malaria deaths occur, would be a public health disaster resulting in millions of deaths," Nosten's coauthor Standwell Nkhoma from the Texas Biomedical Research Institute told the BBC.