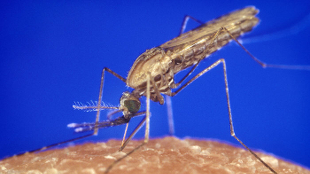 WIKIMEDIA, CDC/JAMES GATHANYMosquitos carrying the malaria parasite are more attracted to human body odor than uninfected mosquitos, according to a study out this week (May 15) in PLOS ONE.

“We think [the parasite] is giving them a heightened sense of smell,” study coauthor James Logan of the London School of Hygiene and Tropical Medicine told BBC News. “We are hypothesizing there is an alteration somewhere in their olfactory system that allows them to find us quicker,” which would make it more likely that the parasite enters the blood stream, ensuring it’s survival—and the spread of the disease.

The researchers made their discovery by exposing Anopheles gambiae mosquitoes to nylon stockings that had been worn by humans for roughly 20 hours. They found that mosquitos infected with the malaria parasite Plasmodium falciparum were around 3 times more likely to land and attempt to feed on the stockings than...

For the moment, the researchers don’t know precisely which odorants are attracting the infected mosquitos. But they plan to find out by attaching tiny electrodes to the insects’ antennae, which they use as smell sensors, reported ScienceNOW. Identifying the specific attractants could help researchers build more efficient traps to capture infected mosquitos.