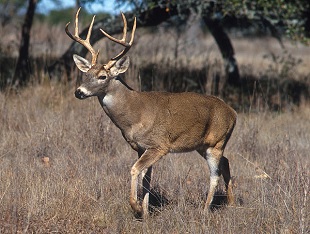 WIKIMEDIA, SCOTT BAUER/USDAAlthough the malarial parasite Plasmodium is found in five mammalian Old World orders, it has been considered absent in deer (Cervidae) and New World mammals in North America since at least the 1960s. But according to a study published last week (February 5) in Science Advances, up to 25 percent of white-tailed deer (Odocoileus virginianus) in the U.S. may in fact be infected.

“It’s a parasite that has been hidden in the most iconic game animal in the United States,” said study coauthor Ellen Martinsen of the Smithsonian Conservation Biology Institute in a press release. “I just stumbled across it.”

Martinsen made the discovery while collecting mosquitoes at the Smithsonian’s National Zoo, searching for malarial parasites that could infect birds. When she discovered another Plasmodium species, P. odocoilei, in a mosquito that also contained white-tail deer blood, she and her...

The researchers found evidence to suggest that the parasite infects around one-quarter of the white-tailed deer population, but not other ungulate species. They also showed that the parasite is generally present only at very low levels in the blood. Although it isn’t yet clear whether the infections harm the deer population, Martinsen said that the discovery does change scientists’ understanding of the distribution and evolutionary history of malaria parasites in mammals.

Penn State University’s Andrew Read, who was not involved in the study, told Science News that he felt “a bit discombobulated” by the study. “How could anybody have missed malaria at these levels?” he said.

The findings are unlikely to have a direct impact on humans since P. odocoilei infects ungulates specifically, said study coauthor Joseph Schall of the University of Vermont in the press release. However, he added, they do highlight the link between human health and wider ecological systems.

“There’s a sudden surge in interest in mosquito biology across the United States,” Schall said. “This is a reminder of the importance of parasite surveys and basic natural history.”