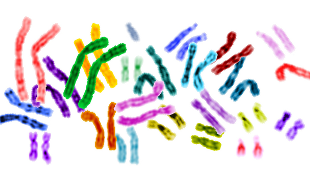 WIKIMEDIA, PLOCIAMMitochondrial Eve—the most recent common ancestor of women, estimated to be 190,000 to 200,000 years old—may not have been much older than ancient “Adam.” According to a pair of papers published in Science yesterday (August 1), the most recent common ancestor of men is now calculated to have lived between 120,000 to 200,000 years ago.

Previous estimates suggested the most recent common male ancestor lived just 50,000 to 60,000 years ago, creating a discrepancy between the divergence of men and women from their most recent common ancestors. But, analyzing the Y chromosome sequences of 69 men from nine populations across the globe, scientists from Stanford University and their colleagues have found that the most recent common patrilineal ancestor did not live much more recently than its matrilineal counterpart. Similarly, by studying the genomes of 1,204 Sardinian men with a focus on the Y chromosome, a team led by...

While it is unlikely that Mitochondrial Eve and Y Chromosome Adam lived side by side, “now it seems that a population giving rise to the strictly maternal and strictly paternal portions of our genomes could have produced individuals who found each other in the same space and time,” the University of Hawaii at Manoa’s Rebecca Cann, professor of cell and molecular biology, wrote in a commentary accompanying the papers.

Stanford’s David Poznik, a PhD student in Carlos Bustamante’s lab, told Phys.org that he and his colleagues were able to better fill in the human family tree largely because of advances in sequencing technologies. “Essentially, we’ve constructed a family tree for the Y chromosome,” Poznik said. “Prior to high-throughput sequencing, the tree was based on just a few hundred variants. Although these variants had revealed the main topology, we couldn’t say much about the length of any branch—the number of variants shared by all of its descendants.”

Still, researchers in this field are far from reaching a consensus on the ages of Mitochondrial Eve and Y Chromosome Adam. Age estimates based on data reported in both Science studies contradict an approximation published by Michael Hammer and his colleagues in March, which traced the most recent common ancestor of the Y chromosome back some 338,000 years, making it much older than that of mitochondrial DNA.

Chronological discrepancies aside, the Wellcome Trust Sanger Institute’s Chris Tyler-Smith said that sequencing genomes has bettered researchers’ understanding of evolution. “It’s great to see large-scale sequencing being applied to the Y chromosome,” Tyler-Smith told Popular Science. “I think this is the future of Y chromosome study.”