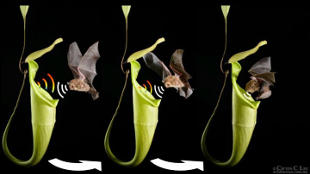 Some bats in Borneo find their daily accomodations thanks to the unique sonic signatures of their preferred pitcher plants.SCHONER ET AL./CURRENT BIOLOGY 2015. ADDITIONAL IMAGES COURTESY OF C.C. LEE AND M.D. TUTTLESome bats in Borneo have living sleeping bags thanks to carnivorous pitcher plants that can snuggly accommodate one of the sleeping mammals in their vase-shaped modified leaves. And researchers working in peat swap forests on the tropical island have discovered that the plants have evolved a unique way of advertising the cozy roost: by reflecting back the bats’ sonar in a unique way. The scientists reported their findings last week (July 9) in Current Biology. The pitcher plants—which constitute the first known example of a plant using a sonic method of attracting a mutualistic partner for fertilization rather than pollination—benefit from serving as bat hotels because the slumbering mammals deposit guano into the pitcher, fertilizing the...

“We mostly think about plant signaling as targeting sight and smell, but here these plants are not so much giving a ‘shout out’ but a ‘shout back’ to the bats to come on over,” Rohan Clarke, an ecologist at Monash University in Australia who didn't take part in the work, told The Verge.

The researchers determined that the pitcher plant, Nepenthes hemsleyana, advertises itself as a roost to Hardwicke's woolly bats, Kerivoula hardwickii, by reflecting back the bats’ high-frequency sonar calls in a way that distinguishes it from other, less accommodating, plants in the ecosystem. The slender, vase-like shape of N. hemsleyana’s pitchers, which shares the habitat with hundreds of other pitcher plant species, appears to be crucial to this reflective communication.

“With these structures, the plants are able to acoustically stand out from their environments so that bats can easily find them,” study coauthor Michael Schöner of Ernst-Moritz-Arndt-University in Greifswald, Germany, said in a statement.

Several plant species in the tropics have evolved sonic tricks for attracting bats that serve as pollinators or agents of seed dispersal, but this is the first time researchers have documented a plant attracting bats to a roosting structure using sound.

Correction (July 13): The original version of this article refered to the pitchers of Nepenthes hemsleyana as flowers. In fact, they are modified leaves. The Scientist regrets the error.