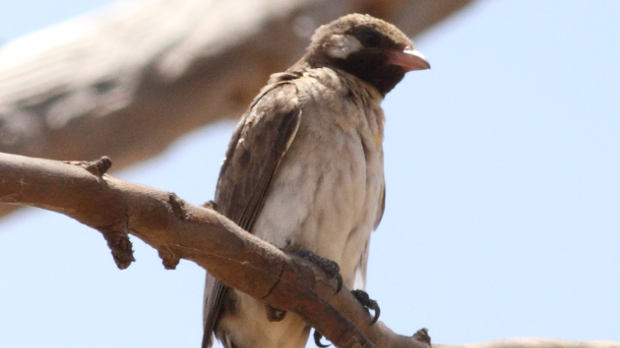 The greater honeyguide (Indicator indicator)FLICKR, WILFERD DUCKITTThe Yao people of Mozambique have cooperated with small birds called honeyguides for generations to find bees nests dripping with sweet, calorie-dense honey. Now, researchers from the University of Cambridge and South African institutions have found that the partnership is more complex than the human hunters simply following the birds to the hives. The team’s results, published last week (July 22) in Science, suggest that Yao hunters vocally communicate with the birds in order to recruit them into the quest for honey.

The key to the mutually beneficial relationship—humans extract honey and leave exposed beeswax for the birds to eat—is a “brrrr-hm” sound that Yao hunters make when they’re on the hunt for honey. “They told us that the reason they make this ‘brrrr-hm’ sound, when they’re walking through the bush looking for bees’ nests, is that it’s the...

Spottiswoode and colleagues made recordings of the “brrrr-hm” sound and other noises, including  the Yao word for “honey” and the sounds of hunters shouting their own names. They then followed Yao honey gatherers on dozens of hunts playing these different sounds through a loudspeaker. The researchers found that hunts accompanied by the “brrrr-hm” call recruited a honeyguide more than 60 percent of the time. Hunts during which other sounds were played only recruited honeyguides about 25 percent of the time. Playing the “brrrr-hm” call also tripled the chances of successfully finding a beehive during these hunts.

“This is an important paper which experimentally verifies what Yao honey hunters say is true: that honeyguides are attracted by the specialized calls honey-hunters use,” Brian Wood, an anthropologist at Yale University who was not involved in the work, told Smithsonian.

Biological anthropologist Richard Wrangham of Harvard University echoed this excitement for the paper. “[This study] shows just how tightly attuned they are to human sounds,” he told BBC News. “They’re not just generally interested in weird noises - anything loud or unusual or whatever. They have been trained, as it were, to look for humans. That really supports the notion that this is an evolved, co-evolutionary relationship.”