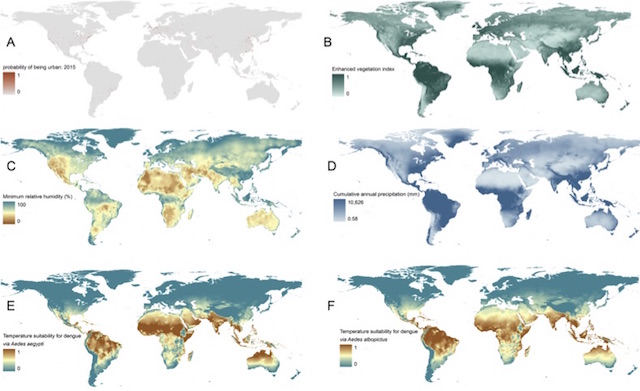 Global map of areas susceptible to Zika virus transmission, based on temperature, rainfall, humidity, vegetation, and urban extentELIFE, J. MESSINA ET AL.The unprecedented Zika outbreak in Latin America has raised questions about the virus’s potential spread. Researchers at the University of Oxford, U.K., and colleagues have now mapped regions of the world where conditions could be right for local Zika transmission. The affected areas are home to more than 2.17 billion people, the researchers reported in a paper published today (April 19) in eLife.

“Our global risk map reveals priority regions where authorities could intervene to control the vector population and where surveillance of the virus should be concentrated in order to improve rapid outbreak response and clinical diagnosis,” study coauthor Janey Messina of Oxford said in a statement.

To produce their map, Messina and colleagues combined data from six different variables: temperatures suitable for...

“Our findings that a global area inhabited by over 2.7 billion people is highly suitable for transmission of Zika virus, combined with the rapid cross-continent spread we have already seen, emphasize why the World Health Organization has declared the current outbreak as a Public Health Emergency of International Concern,” study coauthor David Pigott of Seattle’s Institute for Health Metrics and Evaluation said in the statement.

The affected areas span a large portion of the southeastern U.S., including much of Texas and Florida. The researchers estimate that more than 5.4 million births will occur within the next year in parts of the Americas susceptible to Zika transmission, which is a cause for concern given the established link between Zika and microcephaly.

In addition, the researchers found that large parts of India and sub-Saharan Africa—areas populated by 1.42 billion and 453 million people, respectively—are at risk of Zika transmission.

The map does not account for non-mosquito forms of viral transmission (such as sexual transmission). The researchers called for risk estimates to be updated as new information becomes available.