Overlapping geographic ranges of zoonotic diseases carried by wild terrestrial mammal host species from 27 ordersDREW KRAMERCompiling data from hundreds of studies on past zoonotic disease outbreaks, Barbara Han, a disease ecologist at the Cary Institute of Ecosystem Studies in Millbrook, New York, and her colleagues have mapped where current reservoirs are most likely to be found. The goal was to be able to predict where future pathogenic leaps from mammals to humans are likely to occur.

“What we really want to do is shift the strategy from one of being defensive—always running around putting out fires—to one that’s preemptive,” Han told The Washington Post. “One step toward that goal is to figure out where things are, what’s carrying the known diseases and what’s their distribution.”

But the results, published today (June 14) in Trends in Parasitology, are only a piece of the puzzle, she added. “It’s a hard...

Zoonotic diseases are not, for example, concentrated in tropical environments, as might be predicted. In fact, the subarctic—Alaska, northern Canada, and northern Russia—had the same number of zoonoses as the tropics, despite being home to fewer reservoir species. “Even though there are more species in the tropics, fewer of them carry zoonoses,” Han said in a press release. “In contrast, more of the species living in northern latitudes, such as the Arctic Circle, carry more zoonoses. Understanding the implications of this pattern in light of climate warming trends will be an important line of inquiry that should be addressed sooner rather than later.”

Han and colleagues also turned up surprises when assessing which types of animal hosts harbor the most zoonotic pathogens. Rodents, for example, carried about the same number as carnivores, despite having nearly 10 times as many species.

“I’m hoping to work together with people who really understand public health to think about the wildlife human interface, and the cultural things that permit or prevent that from happening,” Han told The Washington Post. “This is a multifaceted question and very complex . . . and the devil’s in the details.” 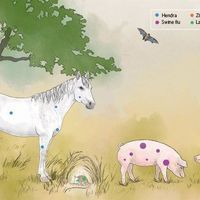