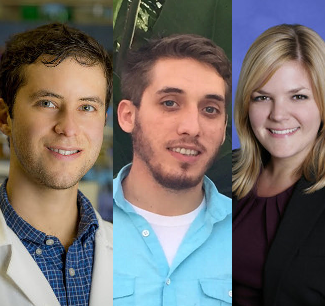 Left to right: Robert Cooper, Alex Eyman, Melissa SlawsonROBERT COOPER PHOTO BY ERIK JEPSEN; COURTESY OF ALEX EYMAN; COURTESY OF MELISSA SLAWSONLawyer Melissa Slawson first heard about the March for Science after receiving an invitation to join the Facebook group for the satellite event in Tucson, Arizona, where her sister lives. She was surprised to find no such group for San Diego.

Entrepreneur Alex Eyman was too. Both Slawson and Eyman ended up creating Facebook groups to spearhead local march planning. “I was only able to attain 500, 600 people in the same time that Melissa was able to attain 6,000 people,” said Eyman. So they teamed up.

Along with Robert Cooper, a quantitative biology postdoc at the University of California, San Diego (UCSD), Slawson and Eyman are now planning an April 22 March for Science in San Diego.

The Scientist: What do you do, and how...

Melissa Slawson: I’m an attorney by trade, and not in any particularly scientific field. . . . My involvement is—other than a passion for the issue from a nonscientific perspective—that I started a Facebook group that has led to this San Diego push.

Robert Cooper: I’m a postdoc at UCSD. . . . I’ve also done some science outreach, volunteering with a local science center. When I was in grad school I was the co-chair of a student climate action group. . . . I’ve had a long interest in the intersection between science and policy.

Alex Eyman: I’m an entrepreneur, slash inventor, slash freelance engineer. . . . I began a coalition for [satellite marches across] the state of California to kind of work together and opt in to share resources.

TS: March for Science today (February 23) announced more than two dozen partner organizations, including the American Association for the Advancement of Science (AAAS). What’s the significance of these partnerships?

RC: It’s significant because, in the scientific community at least, there has been a lot of skepticism, especially around the original messaging, which tended more partisan. So that made a lot of people—myself included—very scared actually, because science needs to be for everyone. We can’t just tell half the population science isn’t for you. We are claiming science for only us. That’s actually one reason why I wanted to get involved as I could: to push a nonpartisan message. And it’s been very reassuring to me to see, as I get in, that pretty much all the leaders are on board with that idea. AAAS, Sigma Xi—they give us legitimacy because these are groups that have been around for a long time and have talked for a long time about the intersection between science and policy. Having them on board, I think, should help go along way toward convincing other scientists, like myself, who might otherwise be skeptical about [the march].

MS: Besides giving legitimacy to the march and our efforts, it also gives a lot more visibility, which really promotes . . . the message that this is a global issue, not just a DC issue.

TS: How do you and your co-organizers aim to show nonpartisan support for “science” with the event you’re organizing?

RC: I plan to make it very clear: be positive. Don’t be against things, be for things. Don’t be [dismissive] of people who many have different ideologies than you. . . . If we do include anyone from the political sphere, [we will] have [participants] from both sides of the aisle. And show that, yeah, we can agree on things. That’s really important right now because everything is so . . . divided. So that’s a major contribution this movement could make, beyond science policy—a demonstration of yeah, there are people on different sides of the aisle can agree on something.

MS: That overarching idea is spilling over into all aspects of how we’re handling the march. . . . We are making it very clear that this is supposed to be a family-friendly event, an inclusive event. We are trying to balance our speakers as well as our sponsors . . . to show that this is a nonpartisan issue.

TS: Are there any San Diego–specific science policy issues you’re hoping to highlight?

RC: The city does have a climate action plan. It might be nice to have a table [with] information about that. We also have, in San Diego, a big water problem: we either have not enough or too much.

AE: Another thing we are going to be able to leverage . . . there are a lot of organizations that are concerned with the quality of the water around our area, and fishing populations, and  . . . biodiversity. That’s kind of a big thing about what San Diego is: we are such a beach city.

TS: What’s your response to the opinion that a march could politicize science, perhaps even do more harm than good?

ML: To an extent, we’re not going to be able to help how certain people feel about our movement. That’s why we are steadfast in our focus of making this a purely scientific issue and not a partisan issue. . . . While we won’t be able to control what individual marchers have to say, or what their signs say, or what people on the outside say, we are very focused on our goals and our nonpartisan approach. We think that our message will prevail.

RC: Another thing to focus on is, with science, everyone benefits from it.

A lot of politicians here like to talk up San Diego as a biotech hub, and that requires investment in science. Making sure we emphasize contributions to the economy and people’s daily lives—that’s not a partisan issue.

A lot of the [satellite march] cities are collaborating online. Just this morning, I looked . . . and saw a few cities calling out another city, for their Twitter account for being too partisan. The leader of that city came on and said . . . Thanks for pointing it out to me. I’ll make sure that we get somebody on that account who is going to be less partisan. There’s a lot of self-policing, and people are being very adamant about maintaining this message.

MS: At least in my experience, our initial outreach has been very, very positive. Even groups that can’t be a sponsor for financial reasons or bandwidth reasons have offered to reach out to their networks to assist us.

AE: When I have been talking to people around, on the street, or teachers at the local high school and especially in the college community—people are so supportive of the idea we are representing. A lot of people have voiced that they have had concerns and that these [marches] needed to happen a long time ago. [Local scientists] are absolutely behind the idea of the movement, but they are afraid—and rightfully so—of a partisan flavor or undertone incidentally riding underneath this. And that’s something we need to be careful of.

TS: How will you and your co-organizers evaluate the success of the march?

ML: Initially, by the number of sponsors and strategic partners we get. . . . Then also I would say by the number of people who seem interested from a grassroots perspective. Right now we have more than 7,000 people in our Facebook group. We are measuring our initial success by that, and then ultimately, it will be how many people show up.

RC:  There’s been some discussion about OK, so we do a march, what are the next steps after that? I think just getting people involved and on this Facebook group, that could be potentially a  resource that we can leverage in the future. . . . Getting people involved, demonstrating that there is a very large amount of support in the public for investing in science, and listening to scientists, and allowing science to be communicating freely.

TS: Do you have any advice for others who are interested in organizing similar events in their communities?

RC: Social science says that facts do not change minds. You can’t change people’s minds by arguing with facts. What changes minds is trust. If you want someone to listen to what you have to say, first you have to make them trust you. The way to make them trust you is making them identify with you. You have to show: I’m the same as you; I’m part of your team; I’m part of your tribe. We’re on the same side. In science I think we have a really strong advantage that we can do that pretty easily, we just don’t all the time. . . . Scientists need to show that We are you; We are your neighbors. To get out into the community and engage.