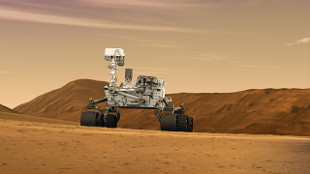 Two years into the Curiosity rover’s exploration of Mars, NASA researchers have unveiled several findings consistent with the idea that the planet once harbored living organisms. The scientists cautioned, however, that there is still no direct evidence of life on Mars, and inorganic processes could also account for their results.

In a paper published this week (December 16) in Science, researchers reported the detection of methane in the air at Gale Crater, where the rover previously uncovered evidence of a long-lost lake. The level of methane in the atmosphere of Mars is around one part per billion—about 4,000 times lower than the concentration found on Earth. Methane is commonly produced as metabolic waste, but can also be made by inorganic processes such as the mixing of olivine and water or reactions between cosmic dust and ultraviolet light.

“You need to know a lot more about what’s...

At the American Geophysical Union meeting held in San Francisco this week, NASA scientists also presented data from the analysis of an ancient rock called Cumberland, which was drilled in May 2013. By heating pieces of the rock and probing the resulting gasses, Curiosity’s Sample Analysis at Mars (SAM) instrument suite detected the organic molecule chlorobenzene. Researchers need more information to determine whether microorganisms may have produced the molecule.

“We will keep working on the puzzles these findings present,” John Grotzinger, Curiosity project scientist at Caltech, said in a press release. “Can we learn more about the active chemistry causing such fluctuations in the amount of methane in the atmosphere? Can we choose rock targets where identifiable organics have been preserved?”

Findings from Curiosity will inform NASA’s Mars 2020 mission, which is aimed at bringing Martian rocks back to Earth for further study. More clues may also come from the ExoMars rover, which the European and Russian space agencies plan to launch in 2018.