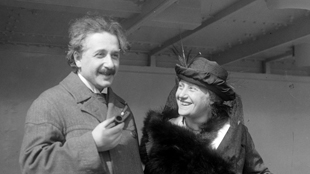 Albert Einstein and his second wife Elsa were first cousins, though the couple never had children.WIKIMEDIA, BALCERHistory is rife with famous married cousins: Charles Darwin, Albert Einstein, Edgar Allan Poe, and H.G. Wells all married their cousins. One estimate suggests that nearly 80 percent of all marriages in history have been between first or second cousins. Now, the largest study of its kind to date links consanguineous marriage—marriage between blood relatives—with a 2-fold increase in the risk of birth defects, such as heart and lung problems and Down syndrome. A similar increased risk was found for mothers over the age of 34. The results were published online Wednesday (July 3) in The Lancet.

Researchers heading the Born in Bradford study—which is tracking the health of 13,500 children born at the Bradford Royal Infirmary between 2007 and 2011—assessed a variety of maternal lifestyle and clinical factors for...

“It is important to note that the absolute increase in risk is small—from [2] percent to 6 percent—meaning that only a small minority of babies born to couples who are blood relatives or older mothers . . . will develop a congenital anomaly,” cautioned study lead Eamonn Sheridan, a clinical geneticist at the University of Leeds in the U.K., in a statement.

The researchers found that consanguineous marriage within Bradford’s large Pakistani community accounted for 31 percent of the birth defects in the study cohort. Among this group, 37 percent of Pakistani marriages were between cousins, compared to 1 percent of all marriages in the U.K.

In contrast with previous research, no increase in birth defects was linked to maternal smoking, alcohol consumption, obesity, or socioeconomic status, though the researchers said that the cohort may not have been large enough to detect significant effects of those risk factors.

“This is the first study that has been able to explore all causes of congenital anomaly in a population where there are sufficient numbers in both consanguineous and non-consanguineous groups to come to reliable conclusions,” said study co-author Neil Small, a public health specialist at the University of Bradford, in the statement.