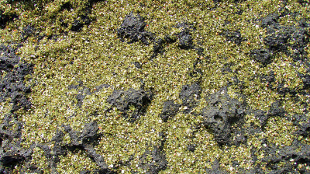 In a lava tube in the Cascade Mountains of Oregon, scientists identified a peculiar microbe—growing successfully in near-freezing temperatures with little access to oxygen and no source of organic food. The microbes generate energy by oxidizing iron from olivine, a volcanic mineral found in the surrounding rocks in the lava tube, as well as the rocks on Mars. The discovery, published this week in Astrobiology, could provide hints regarding the type of life one might expect to find on Mars.

“This reaction involving a common mineral from volcanic rocks just hasn’t been documented before,” coauthor Martin Fisk of Oregon State University said in a press release.

In 2006, Fisk found tracks on a meteorite from Mars that could have been caused by the consumption of the rock by microbes such as this one. Indeed, the team found similar...