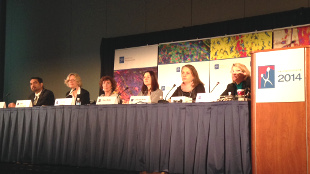 “Detecting, Understanding, and Preventing Neuroinflammation” press conference at SfNJEF AKSTIn a longitudinal study of mothers and their newborn babies, Claudia Buss of the Charité - Universitätsmedizin Berlin and the University of California, Irvine, and her colleagues have found that increased production of the cytokine interleukin-6 (IL-6) in a woman can lead to alterations in the brain connectivity of her offspring. Meanwhile, researchers at Duke University have uncovered evidence in mice that maternal diet, which is linked to inflammation, can cause inflammatory and behavior changes in offspring.

Buss and her colleagues measured levels of IL-6 in maternal blood samples taken early in pregnancy, in the middle, and near the end, then performed MRI scans of the newborns shortly after birth. “This is the only way that we will be able to understand prenatal influences that are not confounded by post-natal influences,” Buss said today (November 17) at a press...

In a separate study, presented by Staci Bilbo of Duke University, researchers found that a mom’s high-fat diet—which can lead to inflammation in the body’s adipose tissue as well as immune changes in brain that may be linked to psychiatric disorders like anxiety and depression—can also impact her offspring. The researchers fed mice either a low-fat diet or a high-fat diet, either enriched or not enriched for branched cain amino acids (BCAAs). Looking at the mothers’ brains midway through pregnancy, the team found increased expression of inflammatory cytokines in the hypothalami of mice fed a high-fat diet. These changes were also accompanied by postpartum increases in depressive-like behaviors in mice fed a BCAA-enriched diet and an increase in anxiety-like behaviors in mice fed a high-fat diet.

Turning to the offspring, the researchers found some “striking” differences both in the expression of inflammatory cell types and in the behavior of the newborn pups, Bilbo said. Specifically, infants born to moms fed a high-fat diet showed decreased expression of microglia markers and increased anxiety-like behaviors. Meanwhile, mice born to moms on a high-fat, high-BCAA diet showed increased expression of a marker for astrocytes. “Maternal diet does matter,” said Bilbo. “We believe [these changes] may be contributing to both metabolic changes as well as mood changes” in the moms and their offspring.