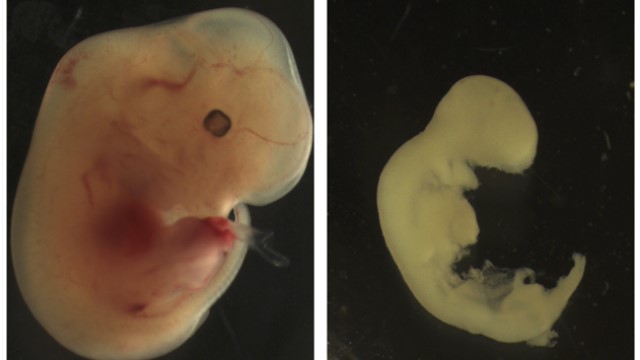 Mouse fetuses developing in Zika-infected mothers with normal immune signaling showed stunted growth and other abnormalities (right). By contrast, fetuses lacking key immune signaling proteins showed more normal development (left). SCI. IMMUNOL. 3, EAAO1680, 2018Some of the developmental damage observed in Zika-infected fetuses may be caused by the maternal immune system, according to a study published today (January 5) in Science Immunology. Researchers at Yale University found that mouse fetuses deprived of immune proteins known as interferon alpha/beta receptors (IFNARs) racked up fewer complications when their mothers were infected with the Zika virus than those with normally functioning proteins.

“We thought the fetuses missing this interferon receptor would be more susceptible to death from Zika infection,” study coauthor Akiko Iwasaki, a Yale immunologist, tells reporters, according to HealthDay News. “What we found was quite the opposite. . . . The fetuses unable to respond to interferon...

IFNARs are activated by type I interferons (IFNs), antiviral proteins released by the mother’s immune system upon viral infection. Previous research in humans has suggested that the loss of IFNARs, and the subsequent pathway trigged by IFN signaling, is associated with greater susceptibility to Zika infection—indeed, the IFNAR-deficient fetuses in this study showed higher viral loads.

But the Yale team found that IFN signaling in mouse models also led to complications such as impaired development and death. What’s more, when the researchers activated the same pathway in cultured human placental tissue, they found deformities such as “knots”—abnormal structures associated with pregnancy-related pathologies. In short, “IFNAR-mediated pathology outweighed the benefit of IFNAR-dependent control of viral replication,” the authors write.

The team also discovered that the pathway triggered by IFNAR was dangerous to the fetus even in the absence of Zika infection, pointing to a possible role for the pathway in other types of problems during pregnancy. “The effects of IFN on the developing placenta likely have implications for pregnancy complications beyond ZIKV,” the team writes in the paper. “Our study implicates type I IFNs as a possible common culprit for virus-associated pregnancy complications and suggests blockade of type I IFNs as a possible intervention.”