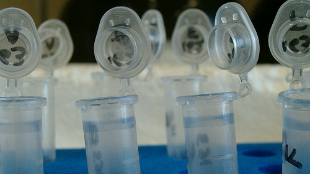 FLICKR, JEAN-ETIENNE MINH-DUY POIRRIERTypically, retractions signal research misconduct more often than they highlight good science. But a pair of retractions by Jeffrey Kelly's group at The Scripps Research Institute received praise for correcting the record after the researchers discovered their initial conclusions were incorrect. Ivan Oransky wrote at Retraction Watch that “Kelly and his colleagues deserve kudos for their efforts, at their own professional expense, to correct the scientific literature.”

It was while examining amyloid disaggregase activities recently that the researchers realized their years-old mistake. Back in 2009, Kelly’s team was examining disaggregation of cross-β-sheet amyloid (Aβ) fibrils in vitro. What the group had interpreted as disaggregation of the Aβ fibrils at the time actually turned out to be Aβ fibrils sticking to the surfaces of multi-well plates and centrifuge tubes. Kelly told Retraction Watch that it took the team “almost a year of effort to figure this out...

He and his colleagues published their corrected findings this month in Protein Science. Their now-invalidated findings were published in the same journal a few years ago. In their latest report they wrote, “we retract the two prior publications reporting that worm or mammalian cell extracts disaggregate Aβ amyloid fibrils in vitro at 37°C. We apologize for misinterpreting our previous data and for any confounding experimental efforts this may have caused.”

As Oransky wrote, “some scientists might just shrug and sweep those errors—and their previous papers—under the rug.” But in this case, he said, they did “the right thing.”