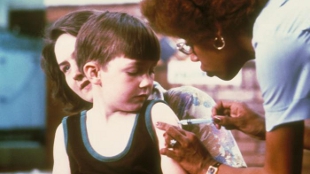 WIKIMEDIA, US DEPT OF HEALTH AND HUMAN SERVICESIn the late 1990s, many Welsh parents heeded the warnings of former researcher Andrew Wakefield, who published a now-retracted study in 1998 that linked the measles, mumps, and rubella (MMR) vaccine to autism. Fifteen years later, even after the paper was found to be plagued with ethical problems and conflicts of interest, many parents still refuse the vaccine for their children, and a measles outbreak is now racing through Southwest Wales, according to The Wall Street Journal. More than 1,200 people have become infected by the virus that causes measles between November 2012 and this month.

Dai Lloyd is a doctor in Wales who has been treating many of the recent cases. “Despite the fact that it’s one of the greatest health measures ever invented by man or woman, there seems to still be a small residue of humanity that objects...

England, like the U.S., was poised to declare measles—a highly contagious disease that cause pneumonia, deafness, and, in roughly one out of 1,000 cases, death—“eliminated.” But the U.K. has now reported more than 1,100 cases in 2013 through May, a 64 percent increase from the same months in 2012. “It’s very galling we had measles eliminated and now we’ve got it again,” Paul Cosford, medical director of Public Health England, told WSJ.