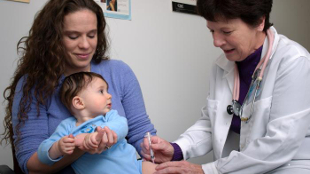 CDC, JAMES GATHANYWhen the first measles vaccine was introduced in the 1960s, researchers saw a surprising result: childhood deaths from not just measles but all sorts of infectious diseases declined dramatically. Now, scientists may finally have an answer for the unexpected off-target effects: measles erases previously acquired immunity against specific pathogens, so knocking down measles incidence allowed more kids to stay armed against other invaders. The research was published last week (May 7) in Science.

“It’s really been a mystery — why do children stop dying at such high rates from all these different infections following introduction of the measles vaccine,” Michael Mina, a postdoc at Princeton University and a medical student at Emory University, told NPR’s Goats and Soda. “We found measles predisposes children to all other infectious diseases.”

Mina and his colleagues modeled epidemiological data from the U.S., Denmark, Wales, and England from before and...

“They have multiple controls that suggest this really is just an effect of the measles virus, and therefore prevented by the vaccine,” infectious disease researcher Tara Smith of Kent State University in Ohio told Forbes. “The data fit in with previous studies that have seen this effect, and with others that looked specifically at immune responses following measles infections, so it looks fairly convincing.”

Correction (May 11): This story has been updated to correctly state that measles infection, not measles vaccination, may result in “immune amnesia.” The Scientist regrets the error.