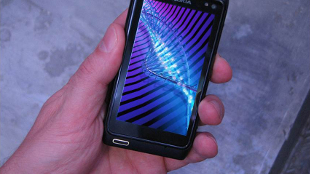 Electrical and bioengineer Aydogan Ozcan of the University of California, Los Angeles, and his colleagues have developed a smartphone attachment that can estimate the lengths of DNA molecules in a sample, according to a study published this month (December 10) in ACS Nano. The unit—which weighs less than 190 grams, costs only $400, and runs on three AAA batteries—can reveal copy-number variations and other genetic features of disease, making it a potential tool for diagnostic field tests, Chemical & Engineering News (C&EN) reported.

The researchers demonstrated the smartphone microscope’s utility by analyzing purified solutions of fluorescently labeled DNA molecules. By putting the solution between two coverslips, they effectively stretched the DNA into straight lines; then, a compact blue laser within the fluorescence microscope attachment shone on the DNA, and the smarphone took a series of photos that were sent to a remote server...

Other groups are also hoping to make smartphone microscopes, to bring the power of microscope-based diagnostics to parts of the world lacking the necessary infrastructure—often the places most in need of strategies to quickly diagnose infectious diseases. Ozcan compares the movement to the personal computer revolution. “If you look at the early computers, they were bulky, they were extremely expensive,” he told The Scientist last year. Now, “[computers] are portable . . . and almost anyone can afford them. The same thing is going on today [with microscopy]. We are miniaturizing our micro- and nano-analysis tools. We’re making them more affordable; we’re making them more powerful.”