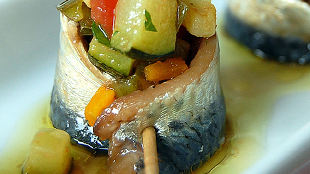 FLICKR, SPANISH RECIPESEating a Mediterranean diet may lower the risk of stroke and offset other negative effects associated with a genetic variant strongly linked to type 2 diabetes, according to a study published this week (August 13) in Diabetes Care. “It’s the first time we can see the effect of a diet on the expression of a genotype,” Keith Ayoob of Albert Einstein College of Medicine in New York, who was not involved in the study, told MedPage Today.

Previous work had demonstrated that a polymorphism in the transcription factor 7-like 2 (TCF7L2) gene is strongly associated with type 2 diabetes, but the variant’s relationship with heart disease and stroke was not clear. The influence of diet on the expression of this genotype has also been uncertain.

To look at the interaction between gene and diet, Dolores Corella of the University of Valencia in Spain and colleagues...