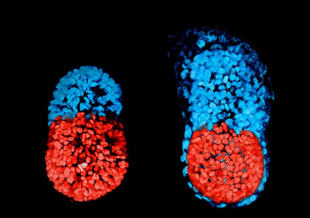 A stem cell-modeled mouse embryo at 96 hours (left); Mouse embryo cultured in vitro for 48 hours from the blastocyst stage (right). The red part is embryonic and the blue extra-embryonic.IMAGE: SARAH HARRISON AND GAELLE RECHER, ZERNICKA-GOETZ LAB, UNIVERSITY OF CAMBRIDGEScientists claim to have created an artificial mouse embryo using two types of stem cells—embryonic stem cells and extra-embryonic trophoblast stem cells, which normally form the placenta. They reported their results in Science yesterday (March 2).

“They are very similar to natural mouse embryos,” lead author Magdalena Zernicka-Goetz, a University of Cambridge biologist, told New Scientist. “We put the two types of stem cells together—which has never been done before—to allow them to speak to each other. We saw that the cells could self-organize themselves without our help.”

Zernicka-Goetz and her colleagues placed the mixture of embryonic and trophoblast stem cells onto a 3D scaffold that mimicked...

Scientists may be able to use similar methods to grow and study early human embryos. “This will allow us to study key events of this critical stage of human development without actually having to work on embryos,” Zernicka-Goetz told Reuters. “(And) knowing how development normally occurs will allow us to understand why it so often goes wrong.”

That proposition, of course, raises myriad ethical questions. Currently, developmental biologists can only use discarded human embryos and can only keep them alive for 14 days, post fertilization. “A regulatory body will ultimately decide on whether human stem cell embryos can be generated and for how long they can be left in the petri dish to develop further,” James Adjaye, a stem cell researcher at Heinrich Heine University in Germany, told The Telegraph. “Of course, there should be an international dialogue on the regulation of such experiments.”