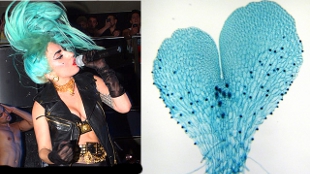 The pop star and one of the fern gametophytes reminiscent of her style. Gaga image via Wikimedia, Eva Rinaldi, fern image courtesy of Duke TodayDuke University researchers continue a long and storied tradition of naming newly discovered or reclassified species after their favorite musicians by christening a genus of ferns containing 19 separate species Gaga. The genus includes two species entirely new to science—Gaga germanotta and Gaga monstraparva.

"We wanted to name this genus for Lady Gaga because of her fervent defense of equality and individual expression," said Duke biologist Kathleen Pryer told Wired Science. "And as we started to consider it, the ferns themselves gave us more reasons why it was a good choice."

The ferns contain the nitrogenous base sequence GAGA in their DNA, and a brightly colored stage of the ferns’ reproductive cycle, called the gametophyte, is reminiscent of one of Gaga's...

Furthermore, "the biology of these ferns is exceptionally obscure and blurred by sexual crossing between species," Pryer told Duke Today. "They have high numbers of chromosomes and asexuality that can lead to offspring that are genetically identical to the parent plant." Gaga, an outspoken supporter of lesbian, gay, bisexual, and transgender (LGBT) rights, was a perfect fit for the ferns, she said. "We think that [Gaga's] second album, Born This Way, is enormously empowering, especially for disenfranchised people and communities like LGBT, ethnic groups, women—and scientists who study odd ferns!"