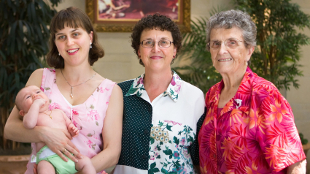 WIKIMEDIA, AZOREGWomen of a certain age undergo menopause not as an adaptation to allow older females to focus on helping out with rearing children—a prevailing notion known as the “grandmother theory”—but as an unintended consequence of males preferentially mating with younger females, according to a new study published in PLOS Computational Biology last week.

“How do you evolve infertility?” asked Rama Singh, the McMaster University biologist who led the study. “It is contrary to the whole notion of natural selection. Natural selection selects for fertility, for reproduction—not for stopping it.”

Singh and colleagues instead posit that menopause, a sudden drop in fertility that occurs in human females later in life, arose because competition for younger mates among men leaves older females with fewer chances to reproduce. As that selective force, which protects fertility in younger women, slackens, the genetic mutations that bring on menopause are allowed to accumulate,...

And conversely, Singh added, if women had been the ones to select younger mates throughout the evolutionary history of the species, human males would lose fertility in old age instead of remaining reproductively viable throughout their lives.