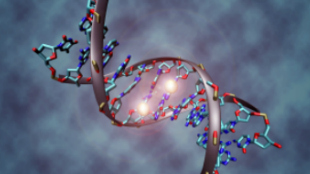 WIKIMEDIA, CHRISTOPH BOCKFive psychiatric disorders, whose diagnoses are based on symptoms rather than biology, share a considerable number of genetic risk factors, researchers reported in Nature Genetics last week (August 11). Schizophrenia, bipolar disorder, and major depressive disorder have the greatest commonality among one another, while depression and attention-deficit/hyperactivity disorder (ADHD) share some genetic underpinnings, as do autism spectrum disorders (ASD) and schizophrenia. “Our results will likely contribute to the efforts now under way to base psychiatric nosology on a firmer empirical footing,” the researchers wrote in their report.

A massive international group of researchers, led by Kenneth Kendler at Virginia Commonwealth University and Naomi Wray at the University of Queensland in Australia, looked across thousands of single nucleotide polymorphisms (SNPs) among people with mental disorders. They found that genetic variants explained 17 percent to 28 percent of the risk for the illnesses. The overlap for this heritability was...

The team found no relationships between ADHD and schizophrenia, bipolar disorder, or autism, nor between autism and bipolar disorder. In a press release, Wray said that she expects the genetic overlap among the conditions is actually greater than the study found, given that her group looked only at common genetic variants. "Shared variants with smaller effects, rare variants, mutations, duplications, deletions, and gene-environment interactions also contribute to these illnesses," she said.

Clinicians are hopeful the results can help contribute to more science-based diagnoses and treatments. Bruce Cuthbert, director of the National Institute of Mental Health’s Division of Adult Translational Research and Treatment Development, said in a statement, "such evidence quantifying shared genetic risk factors among traditional psychiatric diagnoses will help us move toward classification that will be more faithful to nature."