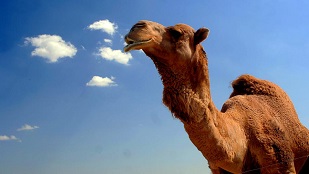 FLICKR, ANGEL MORALES RIZOThe coronavirus that causes Middle East respiratory syndrome (MERS) frequently infects camels and has likely been doing so for more than two decades, according to a study published today (February 25) in mBio. The finding provides the strongest evidence yet that camels are a source of human MERS infection.

Columbia University’s Ian Lipkin and his colleagues screened more than 200 camels from Saudi Arabia, where most MERS cases have been reported. Nearly three-quarters had antibodies for MERS, the researchers found, and young camels were more likely than adults to have active infections. Archived camel blood samples showed evidence of MERS coronavirus infection as far back as 1992.

As of this month (February 7), MERS has infected 182 people and killed 79 since it first surfaced in 2012, according to the World Health Organization. Previous reports have implicated bats as a potential source of the...

"We now know the answers to several questions," Lipkin told NPR. "First, this virus infection is very common in camels. It probably occurs early in these camels. So this is a reservoir that is constantly replenishing itself. It can go directly from camels to humans, with no need for adaptation in another animal. And there's a lot of virus."